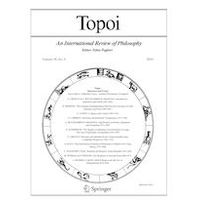 *Deadline for Submissions Extended to 1 June 2020*

The renewed interest in adversariality is important and timely. In an increasingly polarized world and faced with a public debate that is often hostile and unproductive, it is necessary to develop a robust theory of adversariality and its place in argument. Yet, authors in the debate often seem to be lacking a common understanding of what adversariality means, or in what sense it is or is not important/essential/productive. This special issue aims to bring different perspectives on adversariality in argument together and thereby both invigorate and focus an already lively debate. We therefore invite contributions that engage with adversariality in argument from any area of philosophy in the hope for a diverse and informative issue.

Instructions for Submission: All papers will be double-blind peer-reviewed. Submission is organized through TOPOI’s online editorial manager: https://www.editorialmanager.com/topo/default.aspx

Log in, click on “submit new manuscript” and select “Adversariality in argument” from the menu “article type”.

Please upload: 1) a manuscript prepared for double-blind peer-review and 2) a title page containing the title of the paper, name, affiliation and contact details of the author, word-count, abstract and key-words.

If you have questions, please do not hesitate to contact: Katharina Stevens (Katharina.stevens@uleth.ca) or John Casey (j-casey1@neiu.edu)